International Art Competition: The Banality of Evil in Our Daily Lives

Can art influence the future?

An exciting new arts initiative, The Banality of Evil in our Daily Lives Art Prize , has been launched by an independent art collective.

The project aims to raise awareness of thoughtlessness that has unwittingly crept into our everyday lives. A unique opportunity for artists around the world to submit works that explore the lines between good and bad, right and wrong.

The text and the invitation to tender were sent to us by the artist SaySay.love. Please send all questions about the competition to the contact address given in this text.

The philosopher Hannah Arendt as inspiration

The theme of the competition is based on the writings of Hannah Arendt, the famous philosopher and political scientist ( > Wikipedia ). Arendt reported on the trial of Adolph Eichmann, the former head of the “Central Office for Jewish Emigration”, who was involved in organizing the expulsion and deportation of Jews and who was jointly responsible for the murder of an estimated six million people. Essentially, Arendt posed the question: Can one do bad without being bad?

Her conclusion is: “As cruel, cold-hearted and in their extent monstrous as the deeds for which Eichmann was responsible, so common, so banal were the person who represented these deeds. She called this thoughtlessness the “banality of evil”.

Goal of the competition

The aim of the competition is to show how we have become victims of thoughtless behavior in our daily life and to call on all artists to participate and to express their hearts and thoughts in their works of art.

The artist call presents a challenge to communicate what has never been communicated before and to create a platform for groundbreaking ideas that are brought into our community.

The initiator of the project, SaySay Love , suggests that art can change the mind and heart and has the power to dissolve the inhumanity and destruction we create through thoughtless behavior.

Banality of Evil in our Daily Lives art competition

We can all be victims of thoughtlessness in our daily life.
The Banality of Evil in our Daily Lives art competition is an open competition that creates the opportunity for artists to express their view of the banality of evil in daily life. The artist call presents a challenge to communicate what has never been communicated before and to create a platform for groundbreaking ideas that are brought into our community.
We invite all artists worldwide to submit their work and use their art as a means and instrument of a global language to communicate hopes and thoughts and thus create a new vision for our world.

In addition to providing inspiration, the aim of the competition is to show solutions that deal with what is probably the most important and current crisis in our society: the loss of our humanity.

The public selects the best 40 works of art

From these 40 works of art, the finalists are nominated by the elected jury members. The finalists will receive prize money of US $ 2,000 and are invited to present their work at an exhibition in Berlin in May 2020.

Registration for the competition 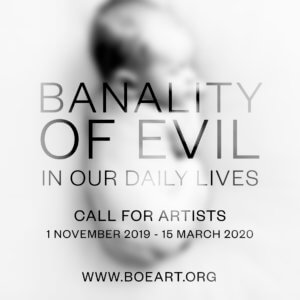 Works of art are accepted in the following disciplines: painting & drawing, photography & digital media, sculpture and performance art.
The call for entry will take place from November 1st, 2019 to March 15th, 2020.
For more information and the registration process, visit our website:
www.boeart.org

The theme of the competition was initiated by the visionary artist and social activist SaySay.Love . SaySay.Love was inspired by the ideas of Hannah Arendt, the famous philosopher and political scientist, and immediately felt a deep connection to the problem she described:
The idea that the worst deeds in human history were not carried out by fanatics or sociopaths, but by ordinary people who only acted according to instructions and felt their thoughts and actions as “normal” and did not question them.
Can a person do evil without being angry? That was the essential question that Hannah Arendt asked herself when she was responsible for the New Yorker in the trial against Adolph Eichmann, the former head of the “Central Office for Jewish Emigration”, who was involved in the organization of the expulsion and deportation of Jews the killing of an estimated six million people was reported.
Hannah Arendt does not see Eichmann as a man who harbored the desire to murder or wreak destruction, but as someone who carried out his profession and the tasks associated with it thoroughly and according to instructions. His private environment described him as social and inconspicuous. He did not correspond in any way to the image of a criminal and was the opposite of any philosophical theory of evil.
In a totalitarian system, therefore, thoughtlessness is enough to nurture the greatest crimes in history – a thoughtlessness that she called the “banality of evil.”

Artists for Future – Today: The ecological footprint of artists

Art in therapy: is it art or can it go away?

Artists for Future – Today: The ecological footprint of artists

Art in therapy: is it art or can it go away?